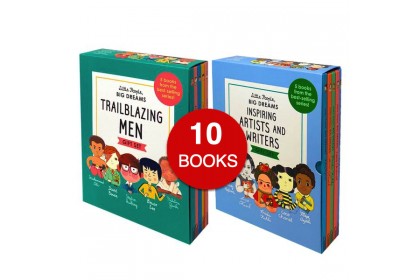 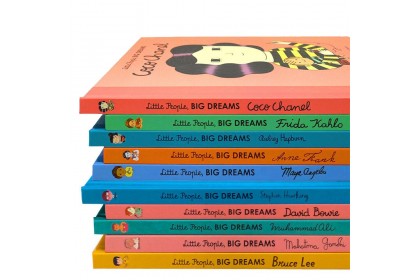 All of them went on to achieve incredible things, yet all of them began life as a little child with a dream. The book follows Maya Angelou, from her early traumatic childhood to her time as a singer, actress, civil rights campaigner and, eventually, one of America's most beloved writers.

Little Anne was born in Germany to a liberal Jewish family. But when the Nazis came into power she was forced to go into hiding with her family. With innovative illustrations and extra facts at the back, this empowering series celebrates the important life stories of wonderful women of the world.

When Frida was a teenager, a terrible road accident changed her life forever. Unable to walk, she began painting from her bed. Her self-portraits, which show her pain and grief, but also her passion for life and instinct for survival, have made her one of the most famous artists of the twentieth century.

Following the death of her mother, Coco spent her early life in an orphanage, where she was taught how to use a needle and thread. From there, she became a cabaret singer, seamstress, hat maker and, eventually, the world's most famous fashion designer.

The colourful life of iconic actress Audrey Hepburn, from her early life during World War Two, to ballet school, her acting career and UNICEF work. With stylish and quirky illustrations and extra facts at the back, this empowering series celebrates the important life stories of wonderful women of the world.

When he was little, Muhammad Ali had his bicycle stolen. He wanted to fight the thief, but a policeman told him to learn how to box first. After training hard in the gym, Muhammad developed a strong jab and an even stronger work ethic.

As a child, young David had a head full of songs and ideas. He was inspired by the pop and mod scenes in Britain to pick up the saxophone. After earning his stripes in some of the coolest bands in London, David splashed onto the solo scene. His songwriting talent and musical skill made him one of rock and roll's all-time greatest artists.

New in the Little People, Big Dreams series, discover the life of Stephen Hawking, the genius physicist and author, in this true story of his life. As a child, Stephen used to look up at the stars and wonder what else was out there. After gaining his education at Oxford University, Stephen went on to make a groundbreaking discovery to do with black holes: Hawking radiation.

Born in San Francisco but raised in Hong Kong, Bruce Lee was the child star of Hong Kong cinema. But, after getting into trouble as a teenager, his father sent him to live in America. Starring roles were hard to come by for Asian-American actors.

As a young teenager in India, Gandhi led a rebellious life and went against his parents' values. But as a young man, he started to form beliefs of his own that harked back to the Hindu principles of his childhood. Gandhi began to dream of unity for all peoples and religions.